From a Dime to a Millionaire

The fresh hint of September filled the air replacing the summer heat wave that had lasted four long months. The porch was collecting the autumn leaves now starting their yearly descent from the Sycamore trees lining our street. The wind would swirl the dry brown leaves around and around. My attention was drawn to their raspy scratching sounds as if taken out of a B-rated Halloween movie. The familiar sound was etched in my memory from past autumns.  My chrome-loaded Chrysler, which had taken a summer of sweaty work as my dad’s gofer to acquire, sat in the driveway of my parent’s home 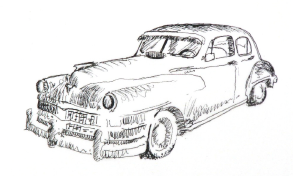 . The mammoth trunk had swallowed everything I brought out of my closet: Two arm loads of clothes, a box of odds and ins from the kitchen, boots, flashlight, large Texas flag, a compass, a green and red metal first aid kit from my scouting days, a small Brownie camera, a well-worn 33-rpm record player, several records of piano concertos and a sport coat a little too big. The record player, records and coat were given to me from the guy across the street before he joined the Army.

The last load was finished; my side of the closet was empty. I pulled the old shoe lace attached to the light switch in the top of the closet, turned around, looked at the brown plastic square bedroom clock: 1:23 pm. I stopped and sat down on the edge of my bed. I caught myself staring out the window onto the south porch of my parent’s home. The middle window pane had a small round hole in the lower right hand corner where my brother, some years before, had accidentally fired a round from his .22 caliber rifle. Knowing Charles as I did, it probably wasn’t an accident.

Strange what we focus on when we are about to leave. My mind was working to adjust to the uneasy sensation that would take place the moment I put the key into the ignition to drive into an unknown future. I felt like Jell-O, shaking with no direction and no substance.

Everything was packed and ready to leave the only home I had ever known. I sat on the edge of my bed running my fingers over the bedspread, a habit of mine. In my hand I clasped a drafting set of compasses and pens. Each instrument snuggly fit into its assigned green velvet impression.  Mr. Goldberg owned the pawn shop on Butternut Street and had charged me a hefty price of $4 for the set, used but not abused. A small borrowed drafting table was the last item packed behind the driver’s seat. My plan was to study architectural engineering. The drafting classes I had taken were to my likening and I had won an award given by the city fathers of Abilene, for a fountain design. My daydreaming ended with a slight jolt bringing me back to reality. With lunch finished I checked for anything I had missed.  My car keys jangled as I walked into the room where I had painted a Western landscape on the entire length of the wall. The mural measured four feet by twelve feet and took six weeks to finish between schoolwork and various jobs. I was proud of my largest art project and it incorporated everything I had learned up to that point concerning painting. I didn’t recognize that the wall painting was the start of my life long career.

Walking out on the porch, Mother followed me. She put her hand over her eyes to shield the sun light and gave me a big smile. I gave Mother a hug and a kiss on her soft cheek, and said, “I love you.” She hugged my neck, kissed my cheek and handed me a paper bag filled with peanut butter and jelly sandwiches, chocolate chip cookies and fruit. My Mother was conservative to the core and so afraid of life, a true introvert. She was a good mom but a little too much pride and control to allow anything in the family to be different. We did not agree on much, although I obeyed and loved her, we were never in sync. She had reservations concerning my leaving. She believed I should get a job locally, perhaps driving the bread truck for Mrs. Baird’s Bread, anything representing job security. If I had done what she wanted, I would have had a very different life.

I had the desire for something better. As I slowly backed down into the street, we waved goodbye. She stood in the driveway, her hand extended until I lost sight of her in the rearview mirror.

Minutes later, I pulled into a gravel parking lot and saw my father, crowbar in hand, pulling nails from a corrugated metal roof that had lasted a century or more. He had secured a bid to tear down the building, an old broom factory, and sell all the metal and other items. He would get a nice price at the scrap yard.

When he saw me, he waved and started slowly making his way down the rusty roof. At the bottom of the la 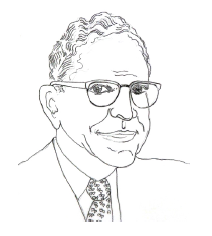 dder he stepped off the last rung, pulled off his glove and extended his hand. The gesture goes back hundreds of years, when men in battle dress pulled off the glove from their fighting arm and raised the visor on their helmet, hence the salute today. We shook hands, hard. He slapped me on the back and motioned me to follow him into the bowels of the old structure he was slowly bringing down piece by piece.

We sat on a couple of old wooden beer barrels. He told me he was going to make Tillie (my mother) a table out of one of the big fly wheels and one of the barrels. He turned to find his ever present thermos of coffee, unscrewed the small plastic red handled cup and poured the still steaming liquid, not offering any to me. My taste for coffee would not be acquired until I joined the Marine Corps a few years later. Some small talk was exchanged and, as always, he settled back, looked at me, assessed the situation, and spoke, “Son, this is hard work and there is nothing wrong with that. Good honest work never hurt anyone.”

I could tell by his tone, body language and the way he was holding his coffee, he had spent some time thinking and composing his farewell speech. I visualized him on his back porch meditating on this moment, maybe weeks or even months ago. What was it he wanted to say to me? What final farewell words did he choose so well to make us both aware of this transition? Nothing in this world of ours was going to alter what had started with the announcement months earlier of his breaking my plate. When I say good bye to him I would be charting my own path.

He sipped his coffee and I looked past him. The old building was a mixture of stillness and silence with the sunlight shining through the gaps in the board walls catching the floating particles that filled the dust covered interior. I settled onto the top of a barrel and reached out to touch him on his left shoulder. “Dad…” and he stopped me as if he already knew what I was about to say. He said to me, “Warren, this desire of yours to go to college is good. Your studies and experiences will take you much further along the path of life than I have chosen for myself. You will do fine. Remember you can make a living with your hands, but using both your hands and your mind will be the best combination for your work.”

He waited for my response. All I could do was nod my head. I found myself wanting to put on a pair of gloves and start pulling nails, helping him as I had done since I was twelve years old. Guilty feelings took over. In a few minutes I would drive off into a future I knew nothing about, leaving my father alone, working so very hard.

He screwed the plastic cup back onto the thermos, sat it on his metal tool box and stood up. He said he loved me very much, pulled me into his big chest and gave me a bear hug. Under his breath he said, “Son, you best be going if you want to reach Lubbock before nightfall.” I turned around and slowly walked to my car. I resisted opening the heavy door, turned and extended my hand, he returned a slight wave. A lonely sigh escaped from my lungs as I started the car and turned onto the street. My window was rolled down; my shirt sleeve was catching the wind. The radio provided no distraction so I listened to the sizzling sounds the tires made on the hot pavement. I drove without thoughts for hours, I was gone.

Dad:  “You can make a living with your hands, but using your hands plus your mind will be the best combination.”

Napoleon Hill: “The starting point of all achievements is desire and the influence of that desire on your entire thinking can motivate one to move or change the present moment into something new and exciting.”

because anything is possible with Charisma