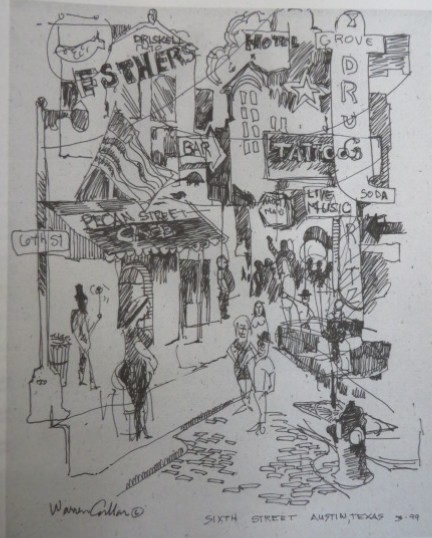 The sketch taken from the Sketch Book  titled Sixth Street Festival was drawn in 1999 the same year I married Kitty Biel. A very good year. The festival has changed since I first went on the street some time in the early eighties but so have I. The turn of the decade also witnessed a new direction in my art career. I had turned to painting in acrylic instead of only watercolors. In the next couple of years I returned to casting bronze sculpture, something I first learned in Mexico.

The weekend of September the 27th and 28th I will be  in my double booth located at 6th and Trinity in Austin, Texas selling my acrylic paintings, bronze sculptures  and my prints. I have been asked  how many shows have I attended over the years, my answer is “too many to count.” I love the experience. Yes it is hard work but I love the people, enjoy telling stories and selling.

If you want a real experience in color, sound and the visuals go to the Pecan Street Art Festival. It’s A real people watching experience with the assortment of vendors selling everything from cactus jam to dog hats and bronze sculptures.

END_OF_DOCUMENT_TOKEN_TO_BE_REPLACED 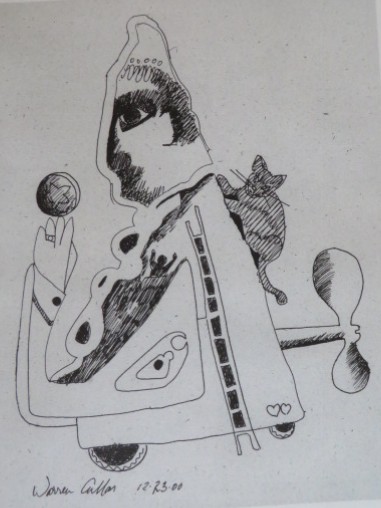 END_OF_DOCUMENT_TOKEN_TO_BE_REPLACED

Written by Jacob and Warren. Nonfiction

Earn your choice of one of the following signed posters by

– or re-posting one of our posts.

Send us a confirmation, your address and $7 for shipping and we will send you a free poster of your choice.

Offer valid until we run out of posters.

Warren has been in well over 25 shows of the biannual Pecan Street Art Festival in Austin, Texas, including the upcoming festival on September 27th and 28th. This year he will be in the center of Trinity and Sixth Street selling prints, paintings, and bronze sculptures. If you can’t make it to the festival, Warren is also holding a follow-up show at his studio on October 4th and 5th. After submitting paintings to the competition for featured art at the festival for years, Warren has been asked to submit paintings for posters in the last two shows.

END_OF_DOCUMENT_TOKEN_TO_BE_REPLACED

This nonfiction story was written by Warren about his experience during 9/11.

The sand gritted in my teeth as I pulled my straw hat tight to my head to keep the wind from tearing it off and rolling it across the desert.  The year was 1976.  I was in Egypt for the summer as one of seventeen college instructors on a study grant. We were guest of the Egyptian government and on that hot and windy afternoon we were touring the monument of Abu Simbal on the Upper Nile.

I was standing in the shadows of four colossal figures of Ramses the Second sitting upon their thrones. The sandstone sculptures towered over me sixty seven feet into a hazy, sand colored sky.  The base of the sculptures was taller than my head. I ran my hand lightly over the low carvings of hieroglyphics, all the while staring at the historical events that were so beautifully portrayed with skillful hands 1257 BCE. The low relief panel composed of a language that only a few Egyptian Archaeologists could decipher, but enough imagery to leave no doubt as to what happened over three thousand years ago. The “headlines” although carved in fine grain sandstone represented the brutal act of Ramses’ conquering army over his foreign enemies. The Pharaoh had his captives paraded before him, hundreds if not thousands, all with their right hands cut off to ensure that they would never fight again. That historic day is so far off in time that the only surviving record is this panel of sandstone, which weathers away a little with each wind storm until even it will only be another inexcusable experience in the tragic fabric of world events.

END_OF_DOCUMENT_TOKEN_TO_BE_REPLACED

because anything is possible with Charisma